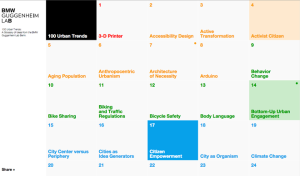 The list, an expansion of last year’s Berlin-specific release, is a glossary of sorts, and each term is associated with a program or event, says Maria Nicanor, the project’s curator. It’s a record of the issues most important to each city. Over the course of the workshops, which averaged about six weeks, the lab put on daily events and discussions in pavilions built specially for the event. Nicanor, who is also curator for architecture at the Guggenheim, distilled the most important messages into these trends.

“They’re not intended to forecast anything new,” says Nicanor. “They’re a list of the most talked-about terms in each of the cities.”