So, this just happened…

A secret location near Cardiff city centre (a warehouse just behind Central Station) hosted the first performance based on the new album by Neon Neon, the musical partnership of Super Furry Animals front man Gruff Rhys and the American producer Boom Bip.

Praxis Makes Perfect, a collab with National Theatre Wales that is part-gig, part theatre performance with an interactive structure, follows the album’s launch on Wednesday, the second from the electrobeat duo. It tells the story of the millionaire communist Giangiacomo Feltrinelli who defied Soviet Russia to publish the novel Doctor Zhivago. Rhys imagines the life and achievements of the wealthy political activist, who fought the Nazis as a partisan but then challenged the post-war Soviets for the sake of art.

We were emailed full details of the event including location of the gig, after we’d purchased our tickets. As part of its audience participation model, ticket holders were asked to wear something red and bring a book which they would be prepared to give away to a stranger. 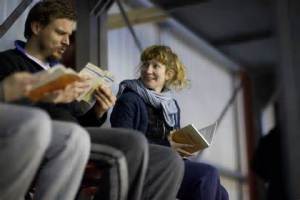 National Theatre Wales has no permanent theatre building and previous productions have been held in an aircraft hangar, a firing range in the Brecon Beacons and a fleet of taxis in Cardiff.

The dramatic performances for Praxis Makes Perfect are scripted by Aberdare-born playwright Tim Price, whose previous work includes the play, The Radicalisation of Bradley Manning.

Visiting Italy with Rhys for a week to research the production, Price met Feltrinelli’s family – a recording by his daughter features in the show – and seeing Boris Pasternak’s original manuscript of Doctor Zhivago, written in Cyrillic, which was smuggled out of Soviet Russia.

The novel, which spans events from the 1905 Russian Revolution to World War II, had been refused publication by the Kremlin but was published in Milan in 1957 at Feltrinelli’s instigation.

In addition to publishing the book, Feltrinelli counted political figures like Cuban leader Fidel Castro among his friends.

He died violently at the age of just 45 in circumstances that are still viewed suspiciously by some. His funeral was attended by 8,000 people.

An original photograph of Feltrinelli (right) who counted Fidel Castro among his friends and on the left a stage shot of the same scene.

Praxis Makes Perfect was performed from 2 to 5 May.

To read a review by Pitchfork of the new Neon Neon album, click here.