In a break from its typically transparent-as-wood approach to state data, the Chinese Government has surprised everyone by requiring 15,000 factories—influential state-owned enterprises included—to issue real-time reports on their air and water emissions. 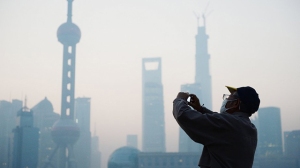 This decision marks huge progress from just a few years ago, when the government was requesting foreign embassies and consulates in the country to cut-off their own pollution reporting. Since then (2009), the government has made gradual steps to improve transparency on pollution statistics; at the start of 2014, 179 cities in China were releasing real-time information on their air quality, according to a report by the Institute of Public and Environmental Affairs (IPE). These real-time reports proved to be extremely useful and were obsessively checked by individuals and organizations during the multiple Air-pocalypses of 2013.

One thought on “And… Breathe…”