The sports clothing company has put their name to an installation called “The Track” in Beijing’s best known art district – 798. The display features eight pairs of trainers suspended as if in motion above an illuminated track. 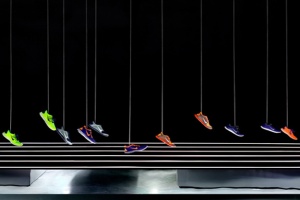 The attraction was put together by Shanghai-based design office Studio-at-Large to promote the new range of Nike free trainers, the display attempts to capture the athletic innovation of the brand by showing the shoes in motion – as if worn by the world’s best athletes making their way around the track.

The various color combinations available have all been used to give it an eye-catching look. This is especially true when contrasted with the pitch black space the display is set against. There are even similarly colorful pieces of clothing arranged around the track to add a spectator element. 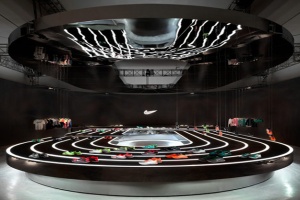 “The Track” is the second display put together by the design office Studio-at-Large for Nike’s releases of their latest trainer.